Ever since the first set of Warp benchmarks went live, people have been curious to see how Warp compares against non-Haskell web servers. Instead of simply throwing together some benchmarks on our local systems, Greg Weber, Matt Brown and I (Michael Snoyman) decided to create a fully reproducible set of benchmarks. For those of you dying of curiosity, here are the results, the explanation follows. 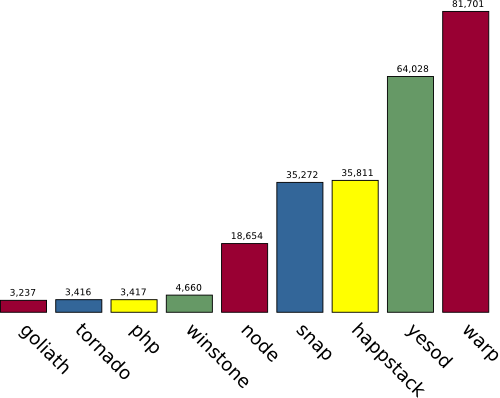 All of the code that went into this benchmark is available in a Github repo. The file setup.sh is actually a shell script which will install all dependencies for the benchmarks, pull the repo and run the tests. The script uses apt-get, and in theory may work for any Debian derivitive, but has only been tested using the Ubuntu AMI.

The test results above were run against an Amazon EC2 extra large instance. I ran the tests on a micro instance as well. However, due to lower RAM, some of the non-Haskell servers fared very poorly, and I decided to only publish the extra large instance results for now. As usual, results will vary based on the setup you run it on, but so far in every setting Warp comes in at least twice as fast as the next contender (excluding Yesod... I'll explain that in a second).

So for the moment, I am calling these numbers preliminary. I have given clear instructions on how to reproduce the results on your own EC2 instance: just download setup.sh and run it. I encourage everyone who is interested in this to either improve the results of an existing benchmark, or include new benchmarks in the mix (Erlang and C# have both been requested, I simply did not have time to get to them.)

Also, I would like to include some bigtable benchmarks in the next run as well, but I do not feel skilled enough to write efficients versions of that benchmark in most languages. If people contribute that code as well we can run that next time.