Measuring the performance of Warp

This is sixth article for the series of "Improving the performance of Warp". Readers are supposed to read the following articles:

In this article, I will finally show you the results of "ping-pong" benchmarks.

My benchmark environment is as follows:

Target web servers are as follows:

Mighty 2.8.1 includes all improvements which I descried so far except the http-types hack. "acme-pong" is not a practical web server. It is a reference implementation to determine the upper-bound on Haskell web-server performance.

I tested several benchmark tools in the past and my favorite one is httperf. I used httperf for the benchmark in this article:

This means that 1,000 HTTP connections are established and each connection sends 100 requests. To my experience, we can think that "rate 100,000" is the maximum request rate.

For all requests, the same index.html file is returned. I used nginx's index.html whose size is 151 bytes. As "127.0.0.1" suggests, I measured web servers locally. I should have measured from a remote machine but I don't have suitable environment at this moment.

httperf is a single process program using the select() system calls. So, if target web servers can utilize multi cores, it reaches its performance boundary. Andreas suggested weighttp to me as an alternative. It is based on the epoll system call family and can use multiple native threads. I used weighttp as follows:

Since Linux has many control parameters, we need to configure the parameters carefully. You can find a good introduction about Linux parameter tuning in ApacheBench & HTTPerf.

I carefully configured both Mighty and nginx as follows:

Here is the result of benchmarks for one worker: 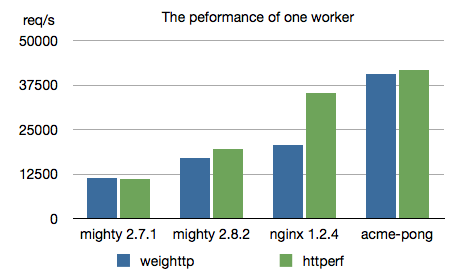 Y-axis means throughput whose unit is requests per second. Of course, the larger, the better. What I can see from this results are:

Since multi-cores is getting more popular, benchmarks for multiple workers would be interesting. Due to the performance limitation, we cannot use httperf for this purpose. Since my machine has 12 cores and weighttp uses three native threads, I measured web servers from one worker to eight workers(to my experience, three native thread is enough to measure 8 workers). Here is the result: 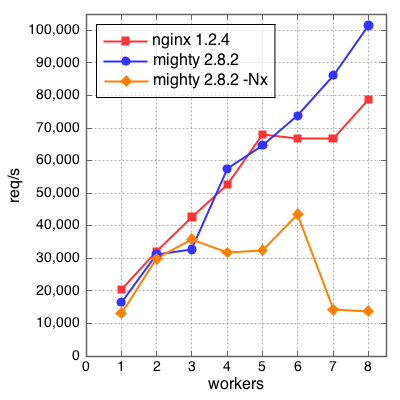 X-axis is the number of workers and y-axis means throughput whose unit is requests per second. "mighty 2.8.2" (blue) increases workers using the prefork technique while "mighty 2.8.2 -Nx" (orange) increases capabilities with the "-RTS -Nx" option. My observations are:

Also, Andreas and I measured Mighty 2.8.2 with Andreas's parallel IO manager. We had very good results but I don't think it is the proper time to show the results. I hope we can open our results in the future.